Time to Feed the Wolf! 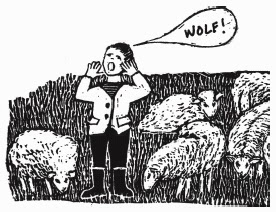 One of the more famous fables (short story, typically with animals as characters, that conveys a moral) of Aesop, a slave and story-teller believed to have lived in ancient Greece, was about the boy who cried "wolf".

The story is about a shepherd boy who repeatedly tricks nearby villagers into thinking a wolf is attacking his flock. Finally, when one actually does appear and the boy again calls for help, the villagers do not come, thinking that it is another false alarm and the sheep are eaten by the wolf.

So it is with the new generation of weather forecasters. It is unheard of for them to offer any forecast without some alert, watch or warning - no matter how insignificant or ridiculous. It's the ultimate in too much information - traditional media, social media, government agencies, etc.

As I look at my favorite weather website currently, there is an alert that today's (2/10/2017) forecast is to be MUCH WARMER than yesterday. IT'S 56 DEGREES ON FEBRUARY 11TH! DOES ANYONE REALLY NEED THAT ALERT! (Of course this is right next to the social media icons so I can sign up to have these brilliant insights sprinkled into EVERY facet of my life!)

One recent practice is naming winter storms - as if those of us in the Midwest were somehow cheated by not being able to refer to our snow storms by name like hurricanes. Those hurricane names sound so cool and ominous! Never mind that about 25 percent of all predicted blizzards/winter storms amount to anything more that a bit of snow blow up against the side of the building.

Meteorologists will name a storm (Atlas, Neptune, Hercules, Zeus, or some other godly name) and then predict 6-12 inches of snow. If you've ever been around 6-12 inches of snow, you know that is like projecting a car payment of $200-1200. There is a difference!

There really is nothing wrong with saying, "We don't really know" and then giving the possible scenarios. If you don't  preclude your forecast that way, it give the appearance that you do know and it is an exact science. 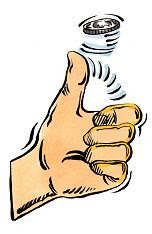 The one thing that weather media elite are very successful at with these obnoxious forecasts is bringing traffic and commerce to a grinding halt. No one wants to get caught out in winter storm "super"-Zeus, even if we don't know if it will happen and if it does when it will start!!

The two parties to whom we first turn for weather information have a vested interest in making a storm or weather conditions worse than they might really be. It is difficult to imagine that weather forecasters don't at least consider that their alerts, watches and warnings will bring them a larger audience. The government wants wants you to stay home or off the roads to make their job of cleaning roads easier.

But neither are adversely affected by being wrong with their prediction - it seems everyone will watch again tomorrow and take heed of another incorrect forecast! How would others fare in their jobs if they did them with the same accuracy as weather forecasters? How about an "accuracy average" under their name like a scoring average or batting average?

As further proof that weather forecasts are nothing more than opinion, why does every television station, radio station, website, etc. need a meteorologist? If it were truly science, one or two meteorologists could read all the clouds and the rest of the media outlets could report it.

And really, who needs a weatherman when the weather is 75 degrees and light winds every day (hello San Diego!).

It's time to feed the wolf! I understand meteorologists taste just like sheep!!

Email ThisBlogThis!Share to TwitterShare to FacebookShare to Pinterest
Labels: weather