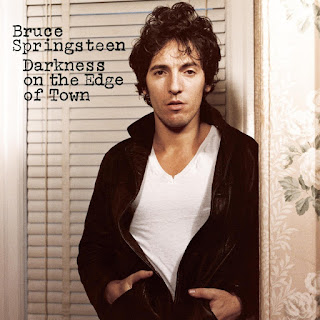 
When the double record "The River" came out in the fall of 1980 shortly after I returned for my junior year at Creighton, it increased the Springsteen published catalog by 50%. We embraced Bruce's latest effort immediately and it became a staple on the turntable.

We took a road trip to Denver to see Springsteen's 10th gig of the River tour at McNicols Arena on October 20, 1980. It was my first of many Boss concerts and it was spectacular. I danced for four hours - with 15,000 others!

I was in Omaha taking classes and working in the summer of  '81. A friend told me he could get tickets to see Springsteen at Red Rocks near Denver. I told him that I'd drive the "Thunderchicken" if he snagged the tickets. And so it was.

Five of us packed in the car and left on a Saturday afternoon from Omaha with the plan to stop at Ole's Big Game Bar & Grill in Paxton, NE on the way out. I'd been to Ole's before and it was a legendary place. It was about four hours down Interstate 80 from Omaha.

We arrived early Saturday evening at Ole's - just in time for a beer, a hot dog (from Ole's famous grill) and some stories (from Ole). It was Saturday night in Paxton and the place was just coming alive as we arrived.

We had too many beers, ate too many hot dogs and heard too many stories (probably told a few too many as well) that night and we spend the night in the car in Ole's parking lot.

We awoke with the sunrise and headed on our way back on I-80 to Denver. It was a little over three hours to Red Rocks which was just past Denver. 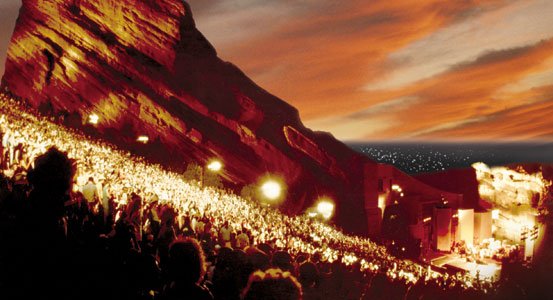 Red Rocks is an natural outdoor amphitheater 10 miles west of Denver overlooking the city. If you've never seen a concert there, you should put it on your "bucket list". Not only is it a magnificent location, the acoustics are perfect. Here is a video tour.

We arrived at Red Rocks around 11:00 am. When we pulled up to the venue, the parking lot was full. We were trying to figure out why the lot would be full a full nine hours prior to the concert. We soon found out that the doors were open and people were inside. When we went inside, the entire front two-thirds of the amphitheater was full. 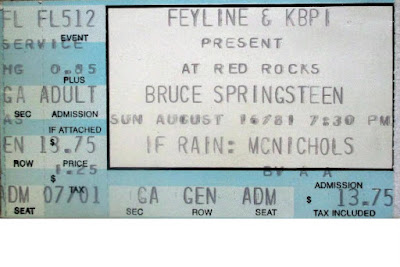 We made our way down to the front of the place and started talking to some gals who were "saving spots" for friends. As we visited, we found some seats to squat in and soon we had third row seats for Bruce Springsteen at Red Rocks!

Since it was still several hours before show time, we laid down to take a nap - on the rocks. We were all so exhausted from our big night at Ole's, we could have slept anywhere.

At some point, I woke up to a large black man standing on the stage towering over me. It didn't take long to realize that it was Clarence Clemons, sax player for the E Street Band. The band was preparing to play a sound check and the crowd was just starting to realize it!

They started "Prove it All Night" but ended that very abruptly telling us that we would get the rest  (of that song) later. With Bruce telling us "here’s one you’re gonna get early," they pivoted into Elvis Presley's "Good Rockin' Tonight", appropriately, since it was the anniversary of Elvis' death. As quickly as it began, it ended with the crowd screaming for more.

Shortly after the sound check, the clouds started building in the west. What had been a perfect afternoon, now looked like it was going to be a wet evening. There was no cover for fans at Red Rocks.

It started to rain...then it started to pour...and pour some more. I remember at one time that my feet were completely submerged - water over the top over my sneakers. The third row seat didn't seem quite as coveted now! Water was gushing down the stairs and it couldn't drain out of the storm drains as fast as it came.

Fortunately, the stage was covered. Though the rain continued, Bruce and the boys took the stage at (or near) the appointed time and began the show with, appropriately, "Who'll Stop The Rain". As it turned out, the answer to that question was a resounding "NO ONE"!

As he played "Out in the Street", he came out onto the apron of the stage which was not covered and was soaking wet. He ran from one side of the stage to the other then slid on his knees the final third leaving a rooster tail a water skier would be proud of!

At one point, Springsteen tried to talk the crowd out of continuing the show. He proposed playing in Denver at McNichols Arena the next night. There were no takers. The crowd was, by now, in a frenzy and wanted nothing to do with postponement. The show, and the rain(!), went on! 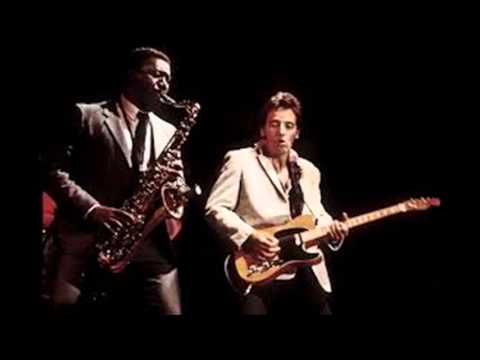 It was if Springsteen tried to overcome the rain storm with his own energy. I had seen him several times before by now, but I had never seen this much energy and showmanship from him.

The set list included the first performance, tour premiere and one of just three times he played of "Sea Cruise". It was complete with the saxophone fog horn leading off!

We were also treated to Bruce's tribute to Elvis, "Johnny Bye Bye", on the anniversary of his death and one of folk's most famous tunes, Woodie Guthrie's "This Land Is Your Land".

Bruce introduced "Growin' Up" with this crazy spaceman story. Here it is from the website Brucebase:


“Alright…this is a song for any of you folks that were here the last time we were here (crowd cheers) when it didn’t rain (chuckles) this is the time that it rained but last time it didn’t rain (chuckles) this is for all you veterans out there… (…) There we were...it was a night…just like tonight (crowd cheers) the wind was blowing...it was raining (crowd cheers) and it wouldn’t stop (crowd cheers) and me and Clarence and Steve were coming home from a show...riding on this dark back road out in New Jersey (crowd cheers) it was dark out there...and sure enough we get a flat tire...Lord…and we ain’t got no spare...now...we were trying to decide which one of us is gonna get out of the car and hitchhike to the gas-station...but it’s so dark out there...we’re in the middle of the woods and I know...I heard some wolves crying out there (crowd howls) and then we heard something that sounded kind of like Frankenstein (crowd roars) and then we heard something that kind of sounded like a Maytag Washer (crowd cheers) so you know we was scared...I wasn’t as scared as the other guys...because I knew one thing...I wasn’t gonna go to the gas-station because...I’m the Boss, baby! (crowd cheers) you guys gotta go, not me...and then, and we also knew that Clarence, he didn’t have to go, did he, Steve?...he didn’t have to go either...so just as we were pushing Miami Steve through the little vent window...up above us, just like in that movie “Close Encounters of the Third Kind,” we saw a blinding light (crowd cheers) and there it was, painted all candy-apple red, Hooker headers, whitewall tires...a space machine that said on the side: “Little Melvin and the Invaders, we play weddings, parties and bar mitzvahs” (crowd cheers) the guy sticks his head out...and he says “Which one of you guys knows the way to the New Jersey Turnpike?” (crowd cheers) we just don’t tell anybody how to get to New Jersey Turnpike...we had to make a deal!...we said “Listen...you gotta give us all one wish, then we’ll tell you how to get to the Turnpike”...that’s pretty slick...so we thought real hard...and just after I give the guy the directions, he goes spinning off into outer space...we didn’t get no wish, didn’t even get no sweet goodbye (emphatic moans from the crowd) we were standing there in the road, disillusioned, to say the least...we had met the first spaceman who probably ever came down to earth and the cat went off without even saying goodbye...I can’t go on with the show, I’m too broken hearted (emphatic moans from the crowd) now, just as he sped off into space, we saw something sparkle down through the sky and land about a hundred yards down the road…and there in the middle of the highway...sitting there in the middle of the night...we found the stuff that we was all thinking about...(crowd cheers) and it was at that moment, we decided to continue our careers in show business (crowd cheers)...”

During the encores, Bruce suggested that they might move the next night's show indoors, but the crowd voted to keep it outdoors.

Bruce Springsteen & the E Street Band
Red Rocks Amphitheater, Denver, CO
August 16, 1981
The River Tour
Set List
Encore
The concert lasted more than four hours. We were soaked to the bone but could not have enjoyed it any more if we tried. We slogged our way up the steps, out of the amphitheater and into the parking lot.

As I looked up into a now star filled sky, I couldn't help but think we were blessed with the rainy weather to make our story just that much more compelling when we told it almost forty years later!!!
Posted by Doug Knust on February 06, 2018