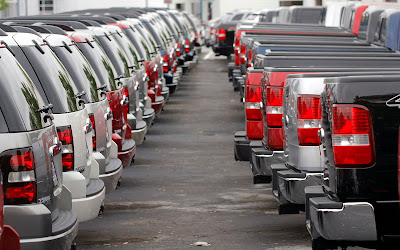 There is a sentiment that somehow this reduction in the number of dealers will save the manufacturers massive amounts of money. Dealers are not a cost center for their respective manufacturers. A study by the Casesa Shapiro Group found that auto dealers provide a vast distribution channel “at virtually no cost” to their manufacturer. Dealers have millions of dollars invested in order to provide prime retail space to manufacturers at no cost. This a major cost shift from the manufacturer to the dealer.

The dealer network is a huge asset to an automaker. Dealers are the automaker’s customer; dealers buy the vehicles, parts, special tools and other items from their manufacturer. In other words, dealers equal revenue for their manufacturer. It makes no sense to cut into your customer base in good times, much less during an economic downturn like the one we’re in right now. A radical reduction of dealers will devastate a manufacturer’s revenue and market share.

Obama Needs to "Walk the Talk"

The Detroit News' Manny Lopez explains why Obama's Automaker policy is fundamentally flawed.
Posted by Doug Knust on May 07, 2009 No comments:

Dealers no Cost Burden to the Manufacturers

During the past several months we have been inundated with information about the future of General Motors and Chrysler. The evening news, the front page of the newspaper, Internet bloggers, and even discussions around the water cooler and the dinner table seem to deal with the subject. During this flurry of activity, one misconception has been repeated so many times that it has mistakenly become accepted as the truth. From the analyst on Wall Street to the consumer on Main Street, people have bought into the notion that dealers somehow create a cost burden to the manufacturers. Nothing could be farther from the truth. Even worse, the President’s Auto Task Force is relying on this misconception to force more rapid dealer reductions at GM and Chrysler.

Did you know that the nation’s GM and Chrysler dealerships today employ almost 500,000 people and that the Task Force proposals would require GM and Chrysler to eliminate as many as 3,600 dealerships and almost 190,000 jobs? The franchised dealers for GM and Chrysler provide direct jobs all across the country, so these rapid reductions would have a pervasive, negative effect on our entire economy. These jobs provide higher than average wages and benefits, and the people losing their jobs will not be able to find comparable employment because of the dire state of auto retailing. In addition to the direct job loss, the rapid dealership closures would create other adverse ripple effects, such as decreases sales and income tax revenue and more non-performing commercial real estate loans.

Did you know that both Chrysler and GM have already implemented market-driven plans to consolidate dealerships, but the Auto Task has insisted upon a rapid acceleration that will threaten GM and Chrysler’s current market share? GM and Chrysler executives have stated many times that every time a dealership closes, the immediate result is the loss of market share. The recovery of that market share, if it occurs at all, will not materialize for at least 18 months. This rapid shuttering of dealerships will put “closed” signs all across America, unnecessarily eroding brand equity and further weakening consumer confidence. Dealership closures also will mean an immediate loss of competition and convenience for consumers.

Did you know the only purported benefits of rapid dealer consolidation offered by the Auto Task Force will not materialize, if at all, for years? The Wall Street analysts on the Auto Task Force have concluded that a rapid reduction in dealers will generate greater sales (“throughput”) and enhanced profitability for the remaining dealers, which will empower these remaining dealers to invest in larger facilities that will enhance the GM and Chrysler brand images. Unfortunately, the devastating costs of rapid dealer reduction will occur today, while any potential benefits are highly speculative and several years away at best. In sharp contrast, the original viability plans of the manufacturers called for an orderly, market-driven transition to fewer dealers over a period of just a few years.

Did you know that the auto manufacturers created the franchise dealer network to out-source virtually 100% of the costs associated with selling new cars? In the aggregate, the nation’s franchise dealers have invested approximately $233 billion in the nation’s automobile retail network. Far from being a burden to the manufacturer, the franchised dealers have created a vast distribution channel that provides product and service to consumers at virtually no cost to the manufacturer. In addition to directly benefiting the manufacturers, this retail distribution network provides competition and convenience for consumers.

Did you know that franchised dealers incur some of the highest risks and receive some of the lowest returns on investment of any business in the United States? The franchised dealership is one of the most capital intensive business models because of the need for millions of dollars to buy and improve real estate and millions of dollars to finance high-cost inventory. On average a dealer needs a $4.9 million line of credit to finance inventory.

Did you know that the nation’s dealers provide well-paying jobs for more than 1 million Americans? To put this in perspective, the largest private sector employer in the United States is Wal-Mart, with 1.3 million people on the payroll. However, the average wage rate at a dealership is $21.63 per hour, while the average wage at Wal-Mart is less than half of that figure. In fact, auto retailing sales position on average pay twice as much as any other retailing position.

Did you know that the dealers of South Dakota provide jobs for 3,480 of our friends and neighbors? In our state, only Sanford Health Systems, Avera-McKennan Hospital and Ellsworth Air Force base hire more people, and the next largest private sector employer in South Dakota is Citi-Bank South Dakota, with a payroll of about 3,200 people.

Did you know that in town after town all across South Dakota that a single auto dealership is often the largest employer in the area and has been for many years? The most astounding aspect of the power of the dealership’s business model is the potential to deliver economic activity even in rural America. The auto dealership remains one of the centerpieces of a community’s economic viability.

Now that you know that a franchised automobile dealership delivers at virtually no cost these tremendous economic benefits to consumers, local communities, and the auto manufacturers, why is the President’s auto task force insisting that GM and Chrysler should rapidly reduce their dealer networks throughout America? The President’s Auto Task Force is effectively mandating the largest Main Street layoff in the history of America – almost 190,000 Americans will lose their jobs and most of these will be on Main Streets all across the country. The current policy of the Auto Task Force will increase unemployment, increase the ranks of the uninsured, and create more potentially toxic assets for the financial sector.
Posted by Doug Knust on May 07, 2009 No comments: