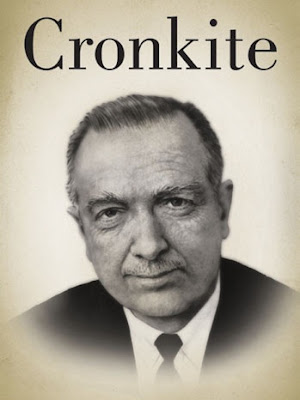 Walter Cronkite was an icon of American broadcasting. He was a legend and anyone over fifty years of age remembers Cronkite's famous announcing the death of President John F. Kennedy or his reporting the assassination of Martin Luther King or his reporting on the moon landing among many others.

Douglas Brinkley's biography of Cronkite took me on a journey that evoked many memories and emotions from my first twenty years on this planet. I enjoy biographies and historical books, but nothing I have read before has inspired so many memories from my childhood. Cronkite was the one who delivered the news of every significant national or world event from my early days.

The very mention of Cronkite's name reminds me of my maternal grandmother who, in a supreme understatement, was not Cronkite's biggest fan. Grandma Theresa was an avid reader. Her conservative politics were fueled by her favorite publications, Human Events and the US News & World Report. Both were popular conservative magazines in the sixties and seventies.

Grandpa Frank was a Goldwater-conservative. Though he died when I was just seven years old, I knew, even then, of his political activism. He was a small businessman/entrepreneur who served many years as Tripp County, South Dakota Republican Chairman. But Grandma took a backseat to no one when it came to Republican politics.

It was Grandma who first put the thought in my mind that a news broadcast might have an ideological slant. As a young boy, I naively thought that the news was the news. But Grandma made it crystal clear that she did not agree with Cronkite's version of the news. She rarely made it through an entire CBS Evening News broadcast without calling Cronkite a "bastard" (her favorite moniker for those with whom she did not agree).

This was long before satellite or cable television. In rural South Dakota, your choices were Cronkite's CBS or a snowy, noisy broadcast of ABC that depended very much on weather conditions and the height of your external television antenna. NBC was not an option. Cronkite's early evening news broadcast was almost the exclusive source of television news in that area.

So Grandma loved to hate Walter. I remember her talking back to the television, telling Walter to quit editorializing and just deliver the news! That was the filter through which I read this book.

Grandma was not the only conservative who never forgave Walter Cronkite for editorializing in early 1969 that the Vietnam War would end in a “bloody stalemate". But Cronkite’s editorializing made him into part of the story. That is not the newsman's role.

As Matthew Sheffield notes, according to Brinkley's book, during the time he was anchoring the CBS Evening News, Cronkite secretly begged liberal senator Bobby Kennedy to run for president and then later interviewed Kennedy about his plans, never disclosing his private pleadings. That's not all, however, Cronkite planted recording devices inside the Republican Party's convention in 1952 and then later had the audacity to go after president Richard Nixon for Watergate.

At the time of Cronkite's death, James Taranto examined how a great newsman helped undermine his profession’s ethos. By taking sides, Cronkite compromised his role as a newsman. The line between editor and newsman since Cronkite has gone from blurred to erased.

Brinkley portrays both the traditional and objective journalist who Jack Kennedy distrusted and the egotist and emphatic liberal who lost his moorings after he retired too early. The revelation that Cronkite was a liberal and talked with liberal politicians, such as Bobby Kennedy, really shouldn't come as a surprise to anybody and pales in comparison with the politicization of the media today.

Grandma had no use for any of Cronkite's colleagues either. Dan Rather, Harry Reasoner, Morley Safer, Eric Sevareid, Mike Wallace, et al were all thorns in her side. Even when cable gave Grandma some choices, I don't think she held Howard K. Smith or Franks Reynolds (ABC) or John Chancellor (NBC) in any higher esteem!

Despite widespread criticism of Brinkley's editing, I found "Cronkite" to be a very interesting read. It was a step back into a time which seemed less political at the time. But looking back, I'm not so sure it was.

It is ironic that a book about the life and times of Walter Cronkite would cause me to write about my Grandma Theresa, but as Walter would say...
Posted by Doug Knust on May 07, 2013 No comments: