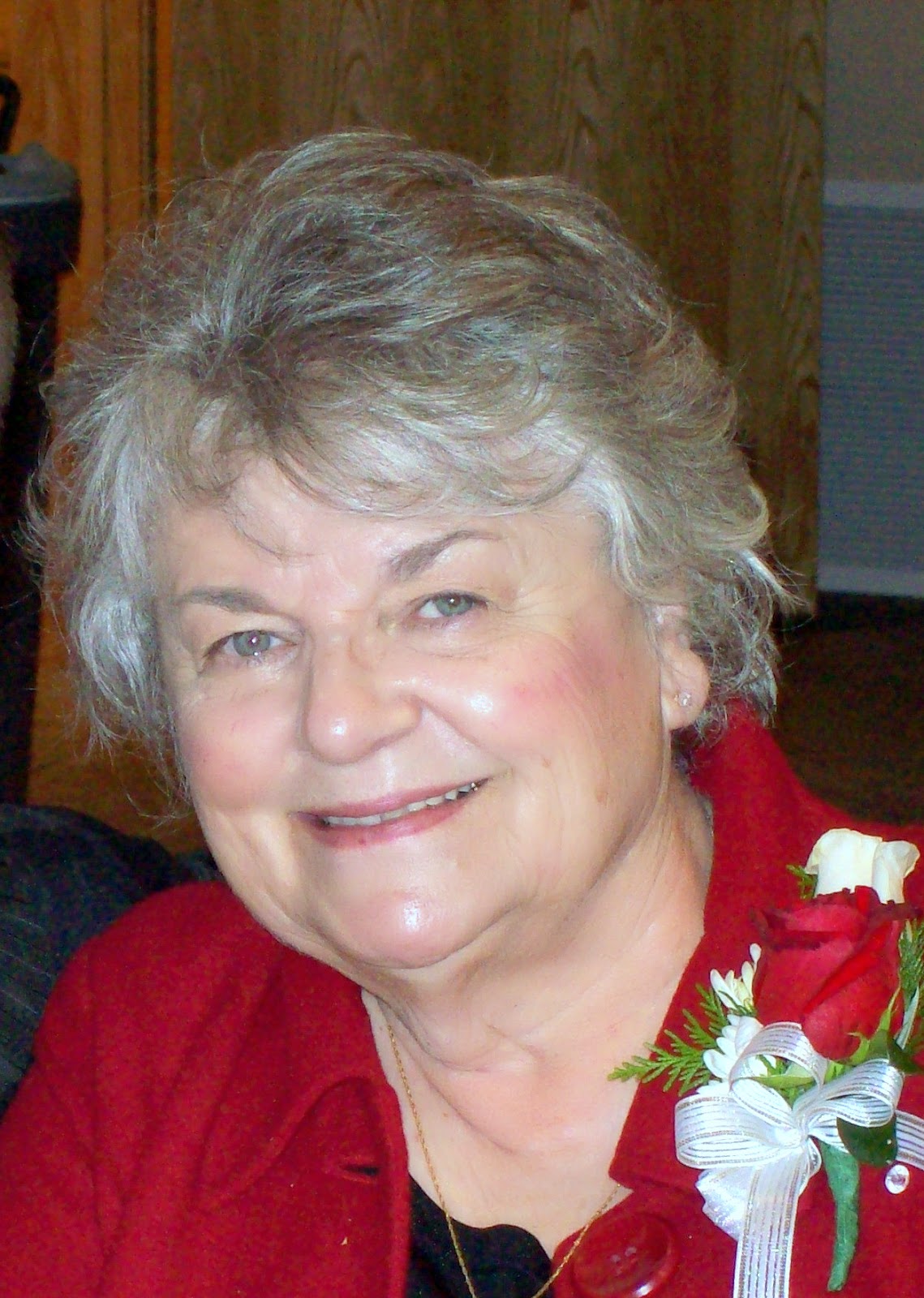 As we like to say about athletes, Mom "brought it every day" and "left it all on the field" when it came to her duties in those roles. She took them seriously and did everything she could to be the best that she could at each of them. That doesn't mean she was without flaw, but she showed her love of family in everything she did each day she was on this planet.

Mom was born the middle of three daughters to Frank and Theresa Wurnig in New Underwood, SD. Frank moved his family to Winner, SD in 1940. Grandpa Frank was a "cradle Catholic" and Grandma Theresa was a convert. They instilled a strong faith in all three of their daughters. Their lives and those of their daughters revolved around St. Mary’s Elementary School where Mom and her two sisters attended school and where Frank was a trustee for many years.

"Patty", as she was known in her school days, took piano lessons when she was young. She loved music and passed that appreciation on to her children and grandchildren. She formed several friendships at St. Mary's and later, at Winner High School, that lasted throughout her life. She got together with a few of these ladies somewhat regularly right up until her death. 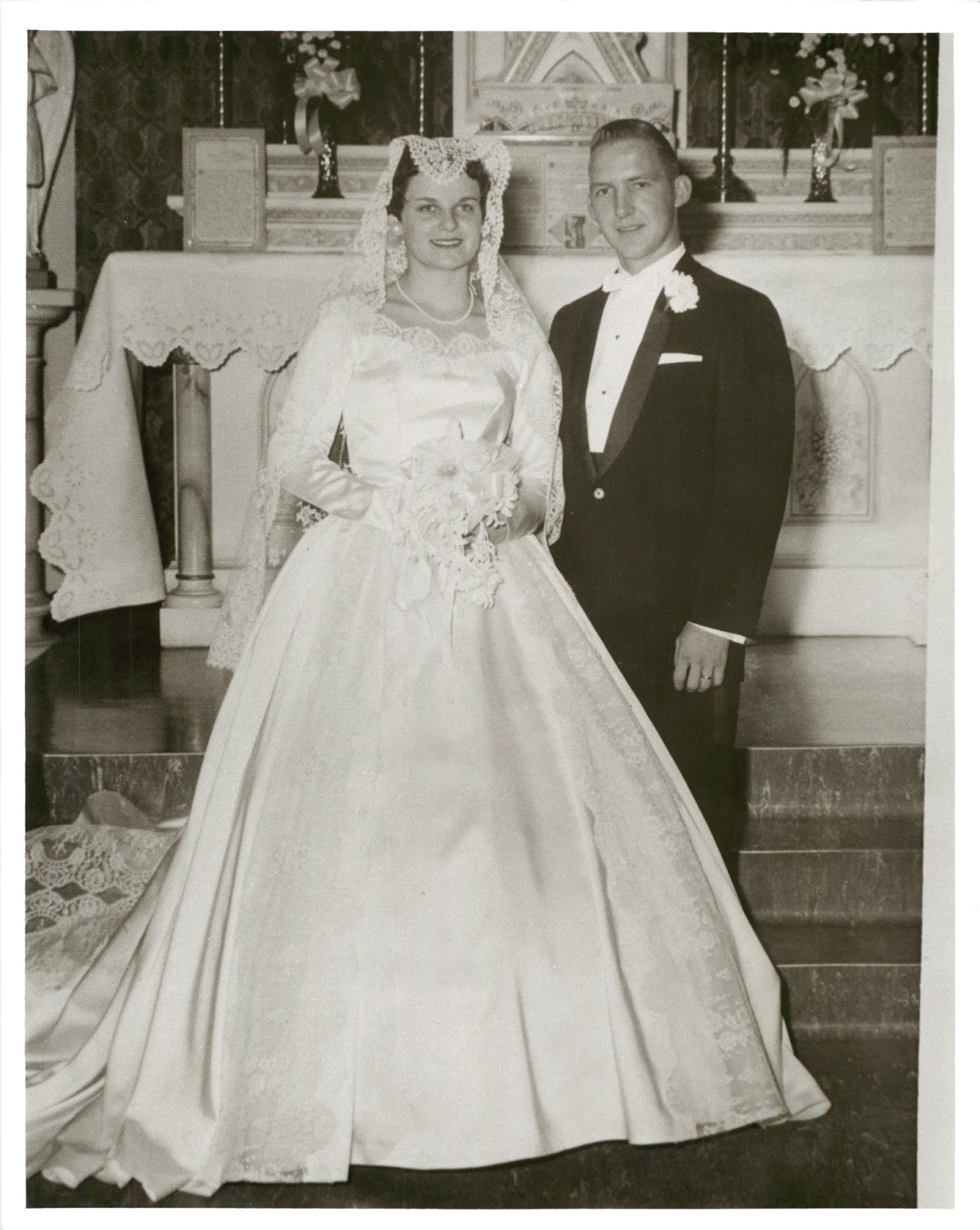 After graduating from WHS, Mom attended college at Duchesne College of the Sacred Heart in Omaha. Duchesne closed as a college in 1968 and became a boarding school for girls. While there, she met my father.

I don't know many stories of my parents' courtship but I know they were married in October of 1959, shortly after Dad's graduation from University of Nebraska. They wasted no time starting a family when Dad took a job with Pillsbury in Mason City, IA, where I was born just ten months after they were married. Then they moved on to Grand Island, NE, where my sister, Christy, was born. When my sister Lisa was born ten months after their move to Chamberlain, my mother insisted that there would be no more moves!

Mom was  a full-time mother. When she wasn't cooking or doing house chores, she was sewing clothes for my sisters (and occasionally for me). This was part hobby and part thriftiness. She ran a very efficient household. She was a coupon clipper and found many other ways to save money.

I was a typical boy and the first thing to happen every time I got a new pair of jeans was that I would, almost immediately, fall on the pavement or playground and rip out the knees of my new jeans. Mom had enough of this so she began to proactively iron on patches to the inside of the knees of the jeans to fortify the denim. I didn't mind that, but when she ironed on the patch on the outside after my falls, the jeans would soon get shuffled to the back of the closet.

One of the skills Mom learned from the nuns at St. Mary's was cursive handwriting. She was a letter and note-writer throughout her life. When I was in college, she would cut out newspaper articles and send them to me with a handwritten note. Even when I moved back to Chamberlain, she would do that - sending the note and article to the dealership in an envelope with Dad as the courier.

Though she wore many hats in her lifetime, Mom's true vocation was a caretaker. She was always caring for others. Whether her family, her church or some other group, Mom took care of others. It started at home.

My father had many strengths, but caring for himself was not one of them. Though Mom took care of him in their young days, once he was diagnosed with diabetes in 1968, caring for Dad became a full time vocation. She embraced it completely and fully. It included preparing special meals for Dad, but that was something else she embraced.

When I was in high school, I came home for lunch every day. Some would say I was pampered (I was!), but Mom would prepare lunch for me every day. She made me a grilled cheese sandwich and tomato soup or creamed chipped beef on toast just about every day I was in high school. But what else would she make? Those were my favorites and so that is what Mom made.

Mom embraced being a grandmother just like every other hat she wore. She loved spending time with her grandkids. Each had a special relationship with her and shared some interest. Whether politics, music, food or just conversation, Grandma Pat knew each of their interests and how to make them feel special.

Mom and Dad began spending time in Arizona in the mid-1990's. After several six-week stints in the "Valley of the Sun", they purchased a home in Sun City. She enjoyed decorating their new home. The Arizona climate was much easier on Mom's rheumatoid arthritis than was the humidity and cold of the South Dakota winters.

Though it was difficult for them to be away from their grandchildren (especially at Christmas time!), they had fifteen great winters in Arizona before Dad's health made the trip too difficult. They made many friends while in Arizona and Mom would stay in touch with many of them through email and hand written letters. 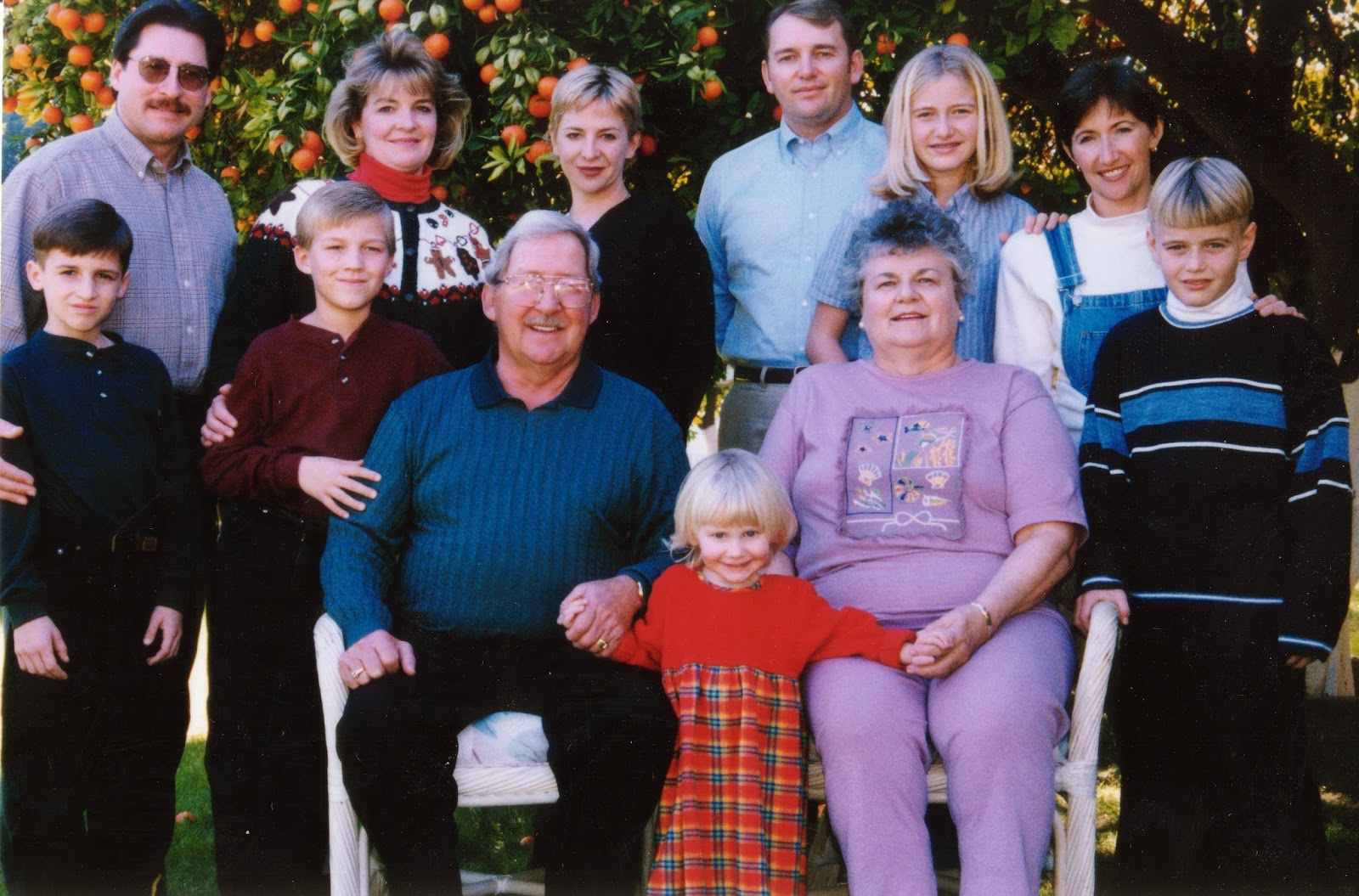 Mom's devout faith was always a beacon for our family. She was a lifelong student of the Catholic faith. She taught religious education when we were young. She was always very involved in many activities at St. James in Chamberlain. I believe Mom and Dad's faith made it easier for them to meet and enjoy others when they lived in Arizona and when Mom live in Sioux Falls. She was a wonderful Catholic example for her children, grandchildren and friends.

She was a conservative Republican. Her support for unborn was unwavering. I remember that she worked on several campaigns when I was young. Whenever I saw Mom, at some point the conversation would turn to politics. Whether local, state or national, she enjoyed talking politics, especially with those who had a similar viewpoint. 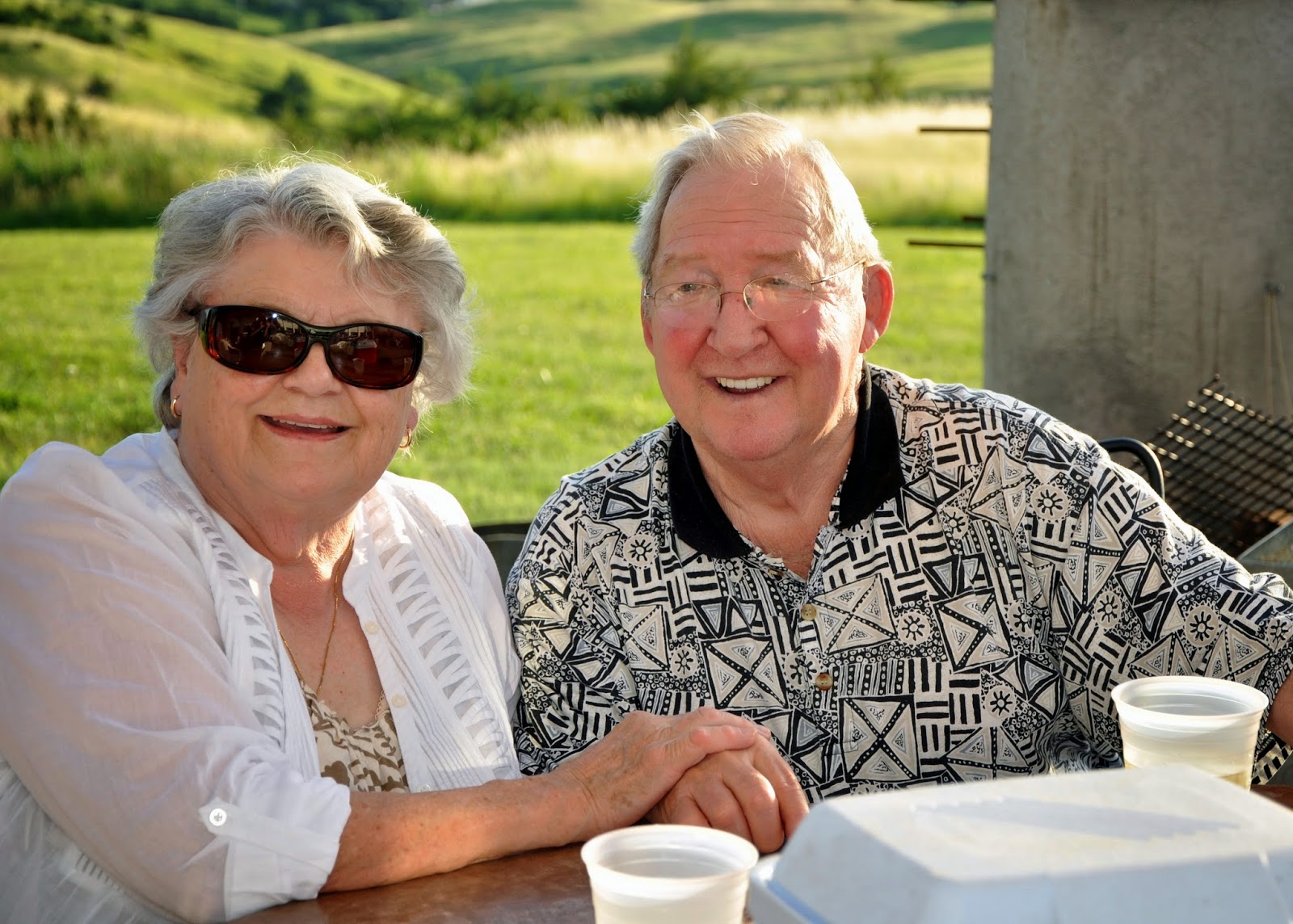 In 2010, when Dad's health deteriorated to the point that Mom could no longer care for him, they moved to Sioux Falls where they both could get the medical attention that they needed. Dad required full time nursing care so they lived in different places. Of course, Mom, ever the caregiver, felt guilty about this.

Mom lived at Trailridge Retirement Community in Sioux Falls. She loved her apartment and enjoyed having her daughters help decorate her place. A visit from either of them was a great excuse for some shopping and decorating.

She had some wonderful friends at Trailridge and in Sioux Falls. She spoke regularly of wonderful visits or outings with Marlene, Teresa and Bernie. Many of her Chamberlain friends would stop to visit her when the came to Sioux Falls.

Mom had so many health problems. Besides the debilitating arthritic condition, she had pulmonary fibrosis, spine surgery, breast cancer and many eye issues. Her calendar was littered with doctor appointments. Often one of her friends would accompany her to these appointments. 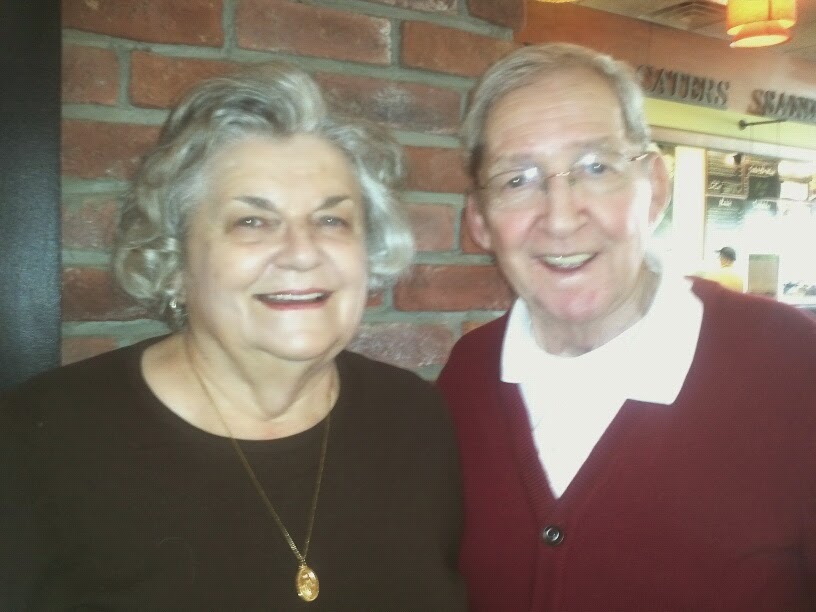 After Dad's death in January, Mom was supposed to have some time to focus on her health. She could finally spend some time and effort taking care of herself - rather than worrying about Dad. But it was just three months after Dad passed away that she received her cancer diagnosis - Stage 4 breast cancer. Though she was ready and willing to fight, she had so many underlying health issues, it was never a fair fight.

So Mom's final lesson to us was that life is not like a Hershey bar where everyone gets an equal square of the bigger chocolate bar. Fairness in life is not divided into equal portions. It just seems that Mom never got to taste the chocolate at all.

I miss you Mom.

Rachel's eulogy for Grandma Pat can be found here.

Lisa's "10 Things I Love About You Mom" can be found here.

I became acquainted with your mom through activities at St. James. She was a wonderful role model for us "younger" women of the Church. She always had a smile on her face and always was interested in finding out how I was doing. Not just to ask, but because she really cared. Thank you for sharing your tribute to her.
Peggy Hanzlik

This is one of the best eulogies I have ever read. Your love shines in every word! My sympathy to you and your family!

Beautiful tribute to your mother. Steve and Julie Grosse-Rhode send our deepest sympathy. Thank you for sharing!

Doug that was lovely. I am so sorry for the loss of both your parents...both FABULOUS parents. It had been quite a while since I saw them but really spectacular people. Prayers to your entire family

I'm very sorry for the loss of your mother. Your eulogy was straight from the heart and you obviously got your moms "way with words".

Very well written, Doug. I'm so sorry for your loss. Your parents were exceptional people who touched the lives of so many around them. I was fortunate to be part of that very large group. They'll not be forgotten.