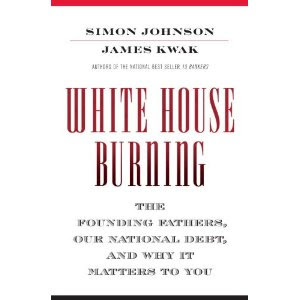 I have a friend that recommended that I read this book. Now that usually works out pretty well for me. But because this book is a political book and my friend comes from the opposite side of the political spectrum from me, I found the book to be a bit different than what I would choose.

The authors start with a historical view of public finance in the United States. I found that to be interesting. The book is a worthwhile read just from an educational standpoint. If you have never taken a class in public finance, you will learn a lot about how the tax system in our country works and how are Founding Fathers set up the financing of our country.

But as the book unfolds, we learn that authors Johnson and Kwak have never met a tax on the "rich" (a term they never define) that they don't embrace. They love every federal program ever enacted (or proposed).

The authors suggest that the government is our national insurance program. Geico and Progressive be damned; I think they would let the federal government take over the automobile insurance as well! There is no limit to the government in their world. The government should defend, build bridges and maintain laws that protect our property rights rather than assess energy taxes on all and rebate some of those taxes to "the poor" (another term never defined).

Johnson and Kwak don't see any problem with our current social security system other than their view that "the rich" don't contribute enough to the system and receive too much in benefits. Payroll taxes are not even paying the current obligations of retirees, much less setting aside enough money in a true financial instrument to pay for anyone in the future.

I do not recall one comment critical of "Obama Care". Rather, they embrace the federal takeover of the healthcare system. Again the problem is the rich doctors bilking the system. Of course the trial attorneys and their malpractice law suits are not a drain on the system - only the doctors.

The authors feel there is not a significant debt problem if the Bush tax cuts are allowed to expire according to the authors. They never acknowledge that, unlike every other institution in the United States (and just about every other government in the world), Congress exempts itself from normal accounting standards. Specifically, it doesn't include the cost of future retirement benefits. If any other institution in the U.S. – including corporations, state governments, local governments, or banks – did their accounting this way, they would go to jail.

This really is the single most shocking fact of our national debt crisis. It renders their argument for "tweaking" the tax system to solve the budget deficit ridiculous. When you know the real numbers, you know what a mess we're in. The only viable solution is cutting the size of government by a huge amount which Johnson and Kwak don't find necessary.

Politicians have shown us that it is politically impossible to reduce spending in Washington D.C. They see only acceptable solution to these problems is to borrow and print and repeat!


To me, "White House Burning" looks like what an unconstrained President Obama would do in his second term if he also had congressional majorities in the House and the Senate. If you like Obama's policies or if you like what you see in Europe, you will like this book.
Posted by Doug Knust on May 28, 2012 No comments: 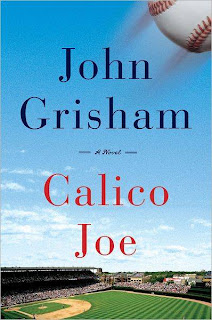 So I get into my car this morning to set off on my weekly trip to my store in Winner (about an hour away). I am looking forward to the trip this morning because I have a new John Grisham novel loaded in the iPhone to listen to on my drive.

I have read or listened to every Grisham book. Most of his books are legal thrillers but he is first and foremost, a great storyteller. The fact that he is a lawyer that takes his fair share of shots at the legal industry doesn't hurt his standing with me.

"Calico Joe" is his newest novel. It is a shorter book in the tradition of "Bleachers" and "A Painted House". My "Type A" personality requires that I have my audio books set to a faster speed. I devoured this four hour book in about three hours - my two hours of driving to Winner and back plus an hour in my basement this evening working out.

If you read a preview or teaser for "Calico Joe", it is presented as a book about sons and fathers set in a backdrop of baseball. It certainly was that, but it was more about redemption and reconciliation to me.

The story is told by Paul Tracey as both a young boy and a grown man. When young Paul told his story of looking up to baseball players and memorizing the stats on the back of baseball cards, it evoked memories of my childhood. My summer days were full of baseball, wiffle ball and evening of trading baseball cards. All of the players young Paul spoke of were the heroes of my childhood. I felt like I lived much of the early part of the story.

Without giving away the story line, there is a theme of atonement and reconciliation. It reminded me of an experience that I had as a young boy (at about the time I was trading baseball cards).

I had a bully in my life for what seemed like years but was probably a couple of weeks. Every day after school, I had to walk by the bully's house. Every day, without fail, he was there with his goon friend to pick on me. I didn't realize it at the time, but though the bully was a year older than me, he wasn't any bigger than I was. Though it was not my nature, I probably could have kicked his ass.

He, obviously, realized that because he had befriended the biggest kid in his class. This goon was conveniently near the bully at all times. So I never got past thinking about the fact that the goon could sneeze and break me in two.

Since they terrorized me every night on my way home, I would constantly look for alternate routes. But they seemed to have a sixth sense and would always be between me and my house. They always found me.

I don't remember the circumstances around why the episodes stopped, but they did. Not long after, I forgot all about it. Several years later, I stood a head taller than the bully.

Flash forward about thirty five years. I see the ex-bully for the first time in a long time. As our eyes meet each other, I nod and he makes his way over to visit me. I am wondering what in the world we might have in common to talk about as he is obviously approaching me.

He sticks his hand out and greets me. I am still bewildered as I grip his hand and shake firmly (perhaps subconsciously trying to remind him that I am bigger and stronger that I was many years ago - and the goon is not by his side anymore!!).

But he wastes no time in letting me know the reason for his seeking me out. He acknowledged being a bully and told me he was sorry for what he did to me. I acknowledged that he scared the shit out of me but I forgave him. We had a good laugh. Our visit ended with him buying me a beer before he went back and joined his group. I thought about that interlude for several days wondering what would cause him to suddenly want to reconcile.

But reconcile we did and I know I felt better about it and I could only imagine how much better he must have felt if he had been carrying that around for thirty five years.

Not long after that, my bully was diagnosed with cancer. Shortly thereafter, he was dead. I have thought about him many times. I wondered if he knew or had some premonition that caused him to yearn for my forgiveness.

"Calico Joe" reminded me of my episode of redemption and forgiveness and how much better I felt that night after shaking hands with my bully. It reminded me just how much both acts set us free.

If you love baseball or stories of fathers and sons, or maybe need a reminder of how important redemption and forgiveness are in any relationship, let me recommend that you take an evening and read "Calico Joe".
Posted by Doug Knust on May 02, 2012 No comments: