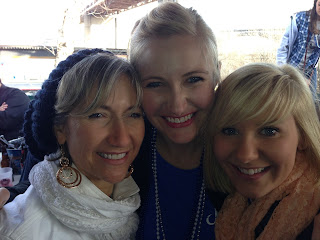 March came in "like a lion" for me as I attended my first "Arch Madness" Missouri Valley Conference Mens Basketball Tournament in St. Louis. The main reason for the junket to St. Louis was a wedding shower for our oldest daughter and her fiance. But someone did some wonderful planning and planned the shower over the MVC tourney weekend for all the Jays fans.

I have seen 93 Final Four games, over 150 Big 8/Big 12 tournament games and many, many other college basketball games through the years, but I was really looking forward to watching the beloved Creighton Bluejays attempt to "double down" on their MVC regular season championship.

I was in Omaha the prior weekend for the regular season finale showdown between the Bluejays and the Wichita Shockers for the regular season title. It was a classic game as Creighton star and National Player of the Year candidate Doug McDermott scored 41 points to lead the Jays to a 91-79 victory. I believe we saw one of the greatest single-game performances in Creighton history by McDermott,

When I was a freshman at Creighton, I was lucky enough to witness a classic Larry Bird performance in 1979 (the year Indiana State went to the national title game). The Omaha World Herald article below from that game said Bird's performance that day "what might be the best performance ever by a college basketball player in Omaha". 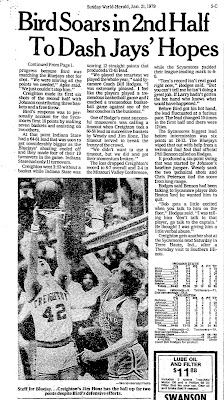 But McDermott's was better because the stakes were so much higher. McDermott was not going to let Creighton lose. I have never witnessed a more spectacular offensive performance than McDermott's in person. It was simply amazing and I'm pretty sure most of the 18,600 fans in attendance don't realize how great it was.

So it was great fun as more than 6,000 Bluejay fans invaded the Scottrade Center in St. Louis for the "Creighton Invitational". The Bluejays brought their "A" game as they disposed of Drake by a count of 65-53 in the first round. They overwhelmed Indiana State 64-43 in the semi-finals setting up a third game of the season between the leagues two best teams.

Wichita State won the first game of the season between the two squads in Wichita 67-64. Creighton had missed two three point shots at the end of that game. As I mentioned above, the Bluejays beat the Shockers in the final regular season game of the year. 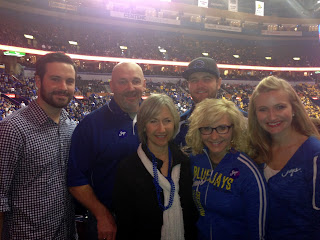 So in front of a national television audience, the Jays played great and the crowd was electric. Creighton (27-7) won its 12th MVC Tournament title pushing its record to 9-0 all-time in MVC Tournament championship games in St. Louis.

Wichita State threw a late scare into the Jays, as they drained consecutive three-pointers to trim CU's lead to 66-61 with 2:28 to play. A free-throw, followed by three-pointer cut CU's edge to one with 43.4 left. But a Bluejay basket with 11 seconds left pushed the lead to three, and WSU's contested three-pointer at the buzzer was off the mark. Jays win 68-65.

While the basketball was great, what really made it fun was sharing the weekend with our family and friends. Our daughter, Rachel, and her fiance, Andrew, had their group of about 13-14 friends that they have been reuniting with at this event for several years. Our son, Alex, and his five former roommates have made "Arch Madness" an annual reunion. We enjoyed our weekend with all of them and it wasn't a bad Creighton recruiting weekend for our daughter, Sarah, who is a junior in high school!

So as the nets came down, I was grateful for the opportunity to experience my first "Arch Madness" and the Jays success. I was grateful for a wonderful wedding shower on Saturday morning. It was fun to be with our family and friends.

It's a good thing we didn't procrastinate a trip to the MVC tournament any longer. It looks like this may have been the Jays' swansong in this conference tournament. Maybe we'll make the trek to Madison Square Garden next year for the Big East Conference Tournament!