Picking Up the Pieces in New Orleans

As I have told in previous posts, my first Final Four was in New Orleans in 1982. Neither my Dad, Chris, Craig not I had been to the Crescent City before. We soon learned that Bourbon Street was not for the faint of heart.

Our first night there, we found a place on each end of Bourbon Street to buy a beer. Soon we had established a routine of buying a beer at one end of Bourbon and stumbling walking to the other end for a refill. It would take 45 minutes to an hour to walk from one end to the other because the street was very crowded and there was so much going on.

Fans from each of the participating Final Four schools would break into a spontaneous cheers whenever they would meet another group from their school. This would encourage fans in the area from other schools to start their own cheers and soon there were four spontaneous pep rallies going on.

Everything was done with great spirits (pun intended) and made for much fun. The cheers got louder as the evening wore on and we got caught up in the excitement.

If you've been to the French Quarter, you know not everything is good CLEAN fun. There are "Gentleman's Clubs" on Bourbon and on some of the side streets in the Quarter.

There was then (and still was the last time I was there) a "club" that had a fake pair of scantily clad legs swinging in and out of the front window of the storefront to garner the attention of "gentlemen". There was a barker hawking people to come in to the establishment.

After several "laps" on Bourbon Street, we found ourselves walking down the sidewalk in front of this enterprise with the doorman trying to separate us from our $10 (or whatever the cover charge was back then). I would like to point out that drink prices were NOT advertised outside this establishment!!

As we were talking and observing people's antics, my Dad walked over by the front of this joint and sneeked a peek in when the door opened as someone was exiting. The "dentally impaired" marketeer who seconds earlier was inviting us to go in, bellowed at him for sneaking a peak (as if one could actually see anything in the two seconds it took for the door to open and then close).

That disrespect toward my Dad was unacceptable to Craig and he had indulged in enough "liquid courage" to tell "Mr. Doorman" just what he thought of his attitude toward Dad. Craig called him a couple of names that I've only heard in the cowboy bars of western South Dakota (usually punctuated with a stream of snus!).

Several guys associated with this fine establishment seemed to appear out of no where to let Craig know that they were going to "assert their authority". They surrounded him and tried to intimidate him.

Chris, always the peacemaker and hoping to help prevent a physical confrontation (Craig's reputation as one who sported a stellar record in college bar fights had preceded him), informed them that Craig "had a piece" (meaning that he had a gun).

Within seconds (literally), two New Orleans cops had Craig up against the wall and were frisking him and looking for his gun. Craig was trying to explain he had no gun while Chris was telling anyone who would listen that he (Chris) was just bluffing. The immediate problem was that no one of any importance in the matter was listening.

The entire sequence of events happened so quickly that it is hard to explain. It happened as fast as or faster than it took you to read this. Meanwhile, Dad was still trying to sneak a peek and I was trying to figure out how we are going to get Craig out of jail.

Fortunately, when the police did not find a "piece" on Craig, things calmed down in a hurry. Craig received a stern warning. Chris should have received a warning but he had moved on to the next "thing" - whatever that turned out to be. (Looking at the above photo, it must have been getting the cops to pose in a photograph!) Dad never really knew anything about it until after it was over. I barely had time to get scared. I had made enough "laps" on Bourbon Street that it was funny pretty quickly!

What could have been a rather disastrous incident on first Final Four trip turns out to be one of those "must tell" stories that we re-live over and over! 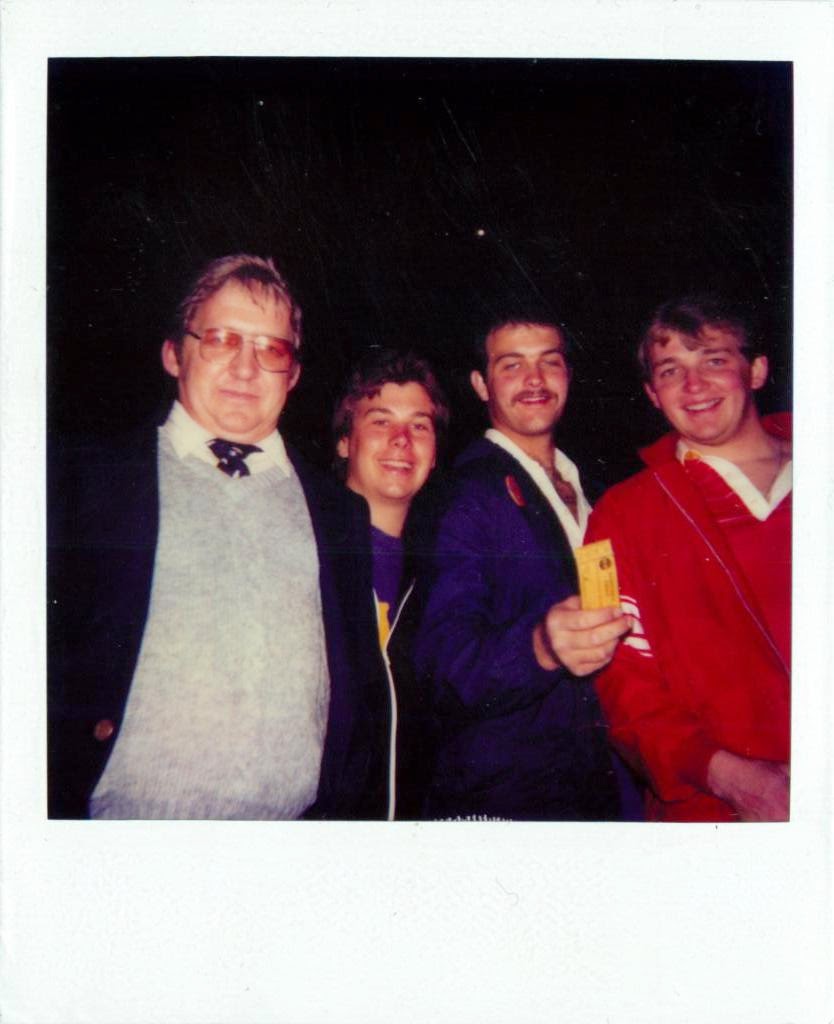