Basking in the Sun 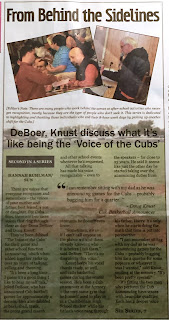 Our local paper, the Chamberlain-Oacoma Sun, as part of their "From Behind the Sidelines" series, featured a local automobile dealer in their October 14, 2015 issue. I was honored to be included with Chamberlain High School football announcer Donn DeBoer.

DeBoer, Knust discuss what it's like being the 'Voice of the Cubs'

There are voices that everyone recognizes and remembers - the voices of your mother and father, best friend, a son or daughter. For Cubs fans, there are two more that ring through clear as day: Donn DeBoer and Doug Knust.

They've been dubbed “The Voice of the Cubs" for their game and other school function announcing, which when added together racks up over 30 years of talking, yelling and cheering.

"It's been a longtime... I guess it’s a good thing I like to hear myself talk," joked DeBoer, who has announced Cub football games for approximately a decade. He’s also dabbled in basketball, track, the prom grand march and other school events whenever he's requested.

All that talking has made his voice recognizable - even to strangers he doesn’t even know.

“Sometimes it’s as if I can’t all anyone on the phone without them already knowing whoit is before I tell them,” said DeBoer. “There’s no disguising this voice."

Knust keeps his vocal chords ready as well and calls basketball games during the winter season. He's been a Cub announcer at the Armory – the very same gym that he himself used to play in as a Chamberlain High School student while his father’s voice rang through the speakers for close to 23 years. He said  it seems like just the other day he started taking over the announcing duties from his father, Harry. It’s only when he starts doing the math that time is put into perspective.


“I remember sitting with my dad as he was announcing games for the Cubs - probably hitting him up for a quarter for some popcorn or whatever it was I wanted," said Knust, smiling at the memory. "It's been pretty special."


It's fitting the two men who perform the Cub announcing have voices with hear like qualities. Each has a deeper voice and one that can roar when necessary, like when there's Cub touchdown or the winning shot for the home team just went swish. Although part of the art of announcing is that announcers are supposed to show neutrality to both teams. But, diehard Cub fans like DeBoer and Knust say that rule doesn't apply to them.


"I'm definitely a ‘homer.' I want my home team to win and get excited when we do," said Knust, who estimates he's called at least 450 basketball games for the Cubs. "Because it's those home games that are special for athletes, parents, students, and so on. The bleachers are packed. The band is playing. The fans are roaring. This all added together creates the perfect storm for announcers. They feed off that energy and get excited - especially when a win is in reach."

"Like those Homecoming games - now those are the games you really want to win," said DeBoer. "You can't help it. Your voice gets louder and louder and more excited when home team does something good."

But announcing is more than just running a play-by-play of the court or field. Every year athletes come and go and it seems like just as they start getting a handle on the athletes' names, the students graduate and new students step-up in their place. It's a never-ending cycle. But, both Knust and DeBoer admit that, for them, it's a bit easier than it looks because both are very active in the community and other Cub events. But, there's always the visiting team that comes with its own, unfamiliar athletes and a few last names that can trip-up even the greatest speakers who can conquer anything during a battle of linguistics.

"Sometimes you have to get out your phonetics on the tricky ones," said Knust. There's also the aspect of time. It seems to slip by so quickly and both men put in hours and hours during their respective seasons. Although Knust owns Harry K's Chevrolet in Chamberlain and Winner and DeBoer works at Sanford Chamberlain Medical Center, the two don't seem to mind putting in a second shift for the Cubs. It's that and several other traits that make them so important to the Cubs.

"One thing that both Donn and Doug bring to the events is a great deal of enthusiasm for the Cubs. They are truly Cub Fans. This enthusiasm spills over to the crowd and helps create the atmosphere that I envision our venues having during the events," said CSD Athletic Director Todd Palmer. "The second thing that both bring to the table is knowledge of the game. They help the crowd understand what is going on during the contest by explaining to them officials signals, giving stats out at half time, etc."Palmer said they also bring professionalism to the game and always are there to help out whether it's announcing or another task.

"They are two individuals that I can count on thus taking that specific stress off of me," said Palmer.

"It keeps me young," said DeBoer.

"And really why wouldn't I keep doing it?" said Knust. "I've got the best seat in the house."


As the article mentions, I took over for my father. He was the original Cubs basketball announcer and started in 1963. I succeeded him in 1992. That's over 52 years of Knusts at the microphone announcing Cubs games.

I've enjoyed it immensely and am grateful to Sun editor Hannah Ruhlman for her thoughtful article.