I have documented here before my tradition of attending college basketball's championship weekend. I have shared stories, tales and traditions from our group. Others have told our story as well - in several different newspapers  and on television. Even David Letterman gave us a cameo on his "Late Night" show back in 1996.

This year I attended my 35th consecutive Final Four in Houston, TX. There were six regulars and one new attendee in our group. Chris Korth, my Final Four partner on all thirty five, Emmet Kenney, attending his 25th, Calvin Rider (23rd), Bren Abbott (22nd), Matt Hesse (14th) and our new guy was Mark Wellmeyer who who attending his 2nd but his first with us. All totalled, this group had taken in 156 Final Fours.

A couple of the Houston media outlets found our three-plus decade Final Four quest to be a compelling story. On the Tuesday before the final Four, the Houston Chronicle published a story by sports reporter, Joseph Duarte, on Chris and me. He had conducted a phone interview of each of us the week before and asked for some photos of previous trips. 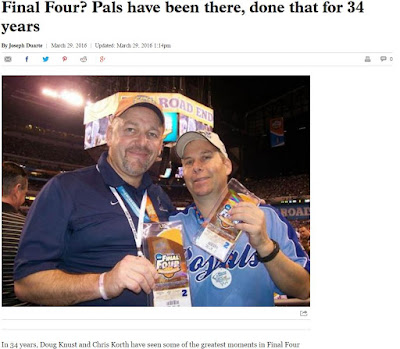 On Friday, just after we arrived in Houston, the local NBC affiliate, KPRC, interviewed us for their 10 PM news show. Our reporter, Laine Fritz, was on her fifth day on this job in Houston. She was a good sport as we got into the cocktails before she and her cameraman (woman), Simone Eli, arrived. When they left, we did not think we had given them much to work with. But she did a tremendous job of piecing a story together.

It was a fun way to start the weekend and it launched us into an extended round of reminiscing about March Madness past over dinner.

As for the games, Saturday delivered a pair of snoozers. In the first national semifinal game, Villanova thumped Oklahoma 95-51 in the most lopsided Final Four game of all time. Game two provided a little more drama as North Carolina whipped Syracuse 83-66 setting up a Villanova vs. North Carolina matchup in the Monday night title tilt.

While North Carolina was a 2.5 point favorite, the computer simulators had Villanova winning 50.1% of the games, North Carolina winning 49.9%. It looked like we could be in for a good championship game.

Well no one could have predicted what a tremendous game we would have. To say that Villanova won 77-74 in an instant classic would be a severe understatement. This was a great game from tip to buzzer. The quality of basketball was very high. Rather than try to detail all of the action in the final minute and a half, you can watch it below:

Knowing that I had been to 35 Final Fours, almost immediately, the texts and calls from friends began asking me if this was the best game I've seen. That's an interesting question and I decided to reserve judgement until we get past the immediate drama and emotion. We live in a "Now" moment...every year we hear "this is the best tournament ever" because of the upsets...that happen every year.

(Note that the first five of these games occurred in my first eight trips to the Final Four. Is there any wonder why I kept going back?!)

...and this list omits two overtime games and a couple of HUGE upsets that have taken place. There have been some truly remarkable games over the past thirty five years.

Perhaps you can appreciate why I hesitate to call Villanova's win over North Carolina best I've ever seen. It is a classic and it will always be mentioned when the list of greatest games is being discussed. Kris Jenkins will always be remembered for that shot. Had he not made it though, it would be Marcus Paige's double clutcher that we would be talking about.

I will come back to this place, its huge and open, and have really tall ceilings. Wait staff was also pretty good. Bartender was awesome and personable. I was really pleased with my party at these venues. Ha! I highly recommend these guys.