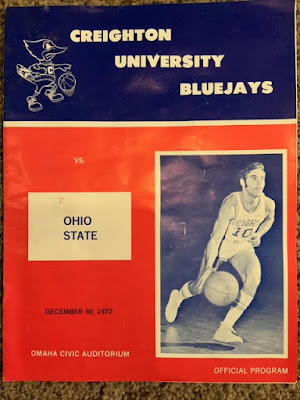 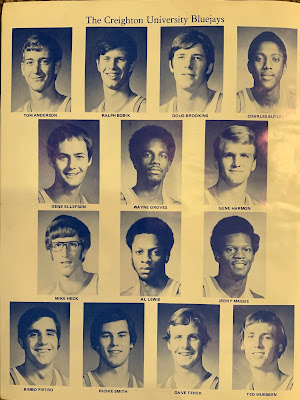 Creighton was the first of four schools that legendary coach Eddie Sutton took to the NCAA Basketball Tournament. He went on to take Arkansas, Kentucky and Oklahoma State to the Big Dance later in his career and he reached the Final Four with Arkansas in 1978 and Oklahoma State in 1995 and 2004. Sutton was coaching Creighton than December afternoon. 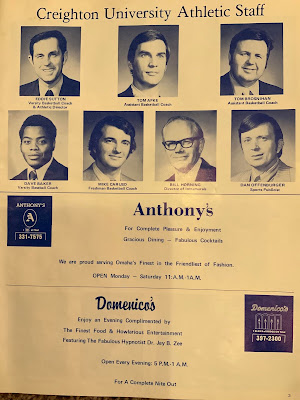 Fred Taylor’s Ohio State team came in to Omaha Civic Auditorium with two superstars. Allen Hornyak was a senior who led the Buckeyes in scoring three straight years and earned All-Big Ten Conference honors each year and All-America recognition as a senior. Luke Witte was also a senior who had been a standout for OSU until his injuries in the infamous OSU-Minnesota brawl, a year earlier, on January 25, 1972.

I remember being awed at Hornyak’s shooting skills. He was filling it up from everywhere. This was 20 years before players were awarded an extra point for their long distance prowness. Hornyak averaged 24.0 points that year. 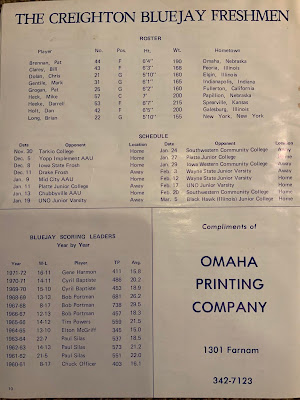 The crowd, all 4,889 of them, were into the game from the opening tip. They carried Eddie Sutton’s Bluejays to a 79-71 upset of the visiting Buckeyes. Gene Harmon led the Jays with 22 points.

I kept my program for that first college basketball game. I recently came across it while going through the "archives". It was fun to see the names and even the ads in that program. 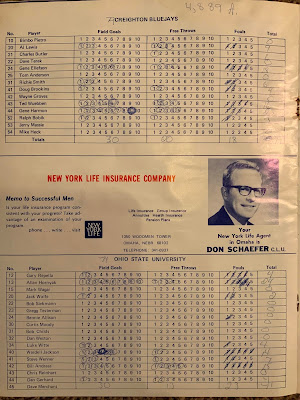 You can see in the photo of the scorecard that I did my best to score the game. I'd be really surprised if the points on my scorecard matched the "official" stats.

I loved the atmosphere of my first college basketball game and immediately began looking forward to my next game. Unfortunately, it would be another six and a half years before I saw another game. More on that later.