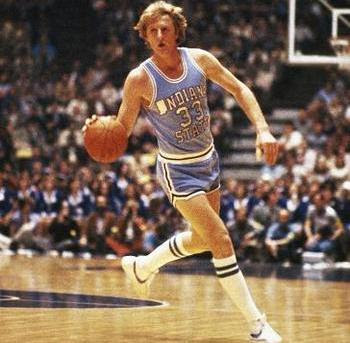 
The game was a Saturday afternoon matchup. In those days, the Creighton students sat courtside in  chairs that were on risers. They were known to stand and "flap" the folding chairs when the Jays were on a roll. The student sections filled quickly that day in anticipation of seeing an upset of a top ten team and one of the best players in college basketball history.

Bird had been drafted by the Celtics a year earlier but decided to return to Indiana State for his senior season. He came into the game leading the country in scoring with a 31.1 PPG average and ranked third nationally in rebounding.

Despite a strong defensive effort (holding Bird to nine points) in the first half, ISU took a 46-43 lead into the locker. The lead turned back and forth throughout the first half. Every Bluejay in the house thought that the Jays would be able to rise in the second half to topple the Sycamores. Creighton had beaten them three times the prior season.

But Bird had different ideas. He dropped his first nine shots (ISU's first 18 points) and scored 20 in the second half to lead the Sycamores to a 90-80 win. Creighton did take a 60-58 lead in the second half which gave us students an opportunity to "flap" the chairs. 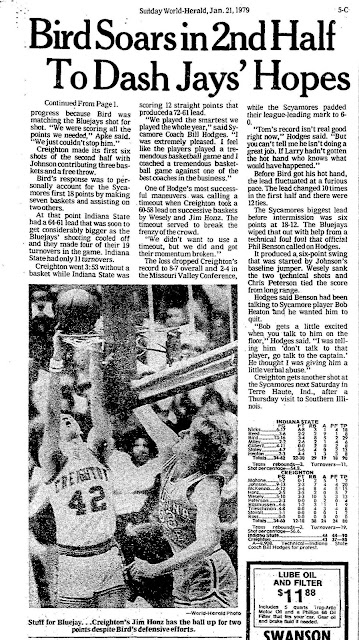 Bird and the Sycamores coasted through the rest of the season including a 77-69 win over Creighton in Terre Haute a week later. They waltzed through the NCAA tournament, running up a 33-0 record, before finally meeting their first and only defeat of the year in Salt Lake City at the hands of Magic and his Michigan State teammates in the National Championship game.

That championship game forever changed college basketball and the NBA. The league finally relented and adopted the ABA's 3-point shot in 1979 for Johnson and Bird's rookie season. Bird and Johnson would continue their rivalry in classic Celtic-Laker matchups over the next decade taking the NBA to a new level of popularity.

There are those who suggest that Bird could have been the greatest scorer in college basketball history under different circumstances. He certainly was one of the college game's greatest shooters. Many of Bird's shot came from outside what would now be the three point arc. It would be interesting to know how many points he would have scored under today's college basketball rules.

I was fortunate to be able to see Larry Bird in person that year. It would be fair to say that experience stoked my love affair with college basketball. It was just three years later that I began my run of attending Final Fours.

Of course, there were the comparisons of that Creighton guy to Larry Bird... 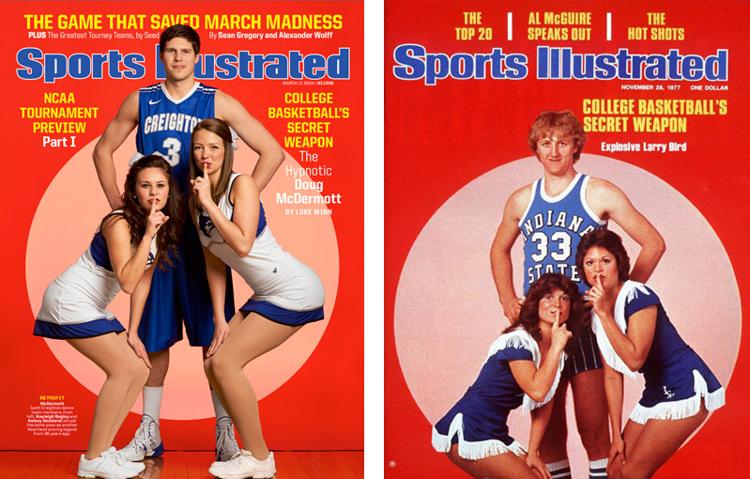